Kenshi offers a variety of play styles in its open-world world, such as building a city, becoming a bounty hunter, playing bandit, or wandering the world in search of famous swords and rare items, but when you start playing as a “wanderer,” the game’s default setting, your parameters are When you start playing as a “wanderer,” which is the game’s default setting, Kenshi’s parameters are mostly 1, and he is a weak character who cannot even beat the wild animals (even goats!) around there. He is a soft character who cannot win even against the wild animals in the area (even against goats!).

Since you are suddenly thrown out of town without a tutorial, although you can do a lot of things, for those who don’t know what to do, we would like to guide you from the start of the game to having your own base of operations in the beginners.

To do anything, you first need money.
Here are three simple ways to make money at the beginning.

You can earn money by digging ores in the field and selling them to stores.
This is an easy way to earn money, requiring no special tools or preparation.
Currently, there are two types of ores in the game iron and copper, and copper is recommended for mining.
Mining is started by right-clicking on an ore that can be mined, and stored items can be checked and obtained by left-clicking on the ore.
You can also semi-automatically execute mining by right-clicking while holding down the “Shift” key.

(1) Squin
The town is located near the lower left corner of the starting point of the wanderer’s journey. (Squin is the town in the middle of the image below.)
The key point is that high weight copper can be obtained near the town, and the bandits who raid the town are not so strong.
The two mining locations in the image below are recommended.
◆Point 1

Point 1 is a little confusing and you may think there is only iron, but iron and copper are side by side as shown in the image below.

In Point 2, one copper and one iron are located a little apart from each other around the image.

(2)Blister Hill
It is a little far from where you start as a wanderer, but it is located above the green area that spreads a little to the upper right.
There are no extremely strong enemies along the way and the security is relatively stable, so it is easy to get there, but there is one major point to note.
The area from just above the starting point to the top of Blister Hill (shown in the map below) is the territory of a fanatical human supremacist state, so if you choose a non-human race, you run the risk of being ignored or attacked with difficulty. Especially when it comes to skeletons, it is best to stay away from them as they will attack you without hesitation.

The recommended point is here, an excellent spot where there are three iron spot near the town.

This one is also a bit far from the town, but it is scattered as shown in the image below.

Bandits and wild animals sometimes come here, but most of them can be killed by patrolling soldiers, or you can take advantage of them and make money by chasing down the enemies they kill.
Since there is no copper nearby at all here, the profit margin is low instead of being very safe.

These are the two places we recommend in the early stages of the project.

The products used for trading are those whose selling price and buying price are the same and are handled at stores with signs like this. 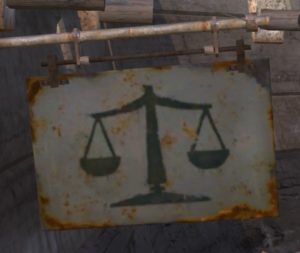 However, trading in this game is very difficult.
This is because the market price of each town is not fixed throughout the game, but fluctuates depending on the time and each time you play.
In other words, it is not possible to play the game efficiently after checking the market prices on a web site.

Another factor that raises the difficulty level is the fact that the players are carrying heavy luggage as they go from town to town, and if they are discovered, they are instantly in danger.

Another lucrative trade is smuggling.
As the name implies, this is the practice of secretly selling illegal goods. These goods are not sold in regular stores, so you use the stores of the stolen goods buyers (usually found in the Bar) or the stores of the Thieves’ Guild.

Stealing items from someone else’s house while in covert mode.
Until you improve your skill at stealing and hiding, it may seem difficult because you will be discovered immediately, but as you gradually increase your success rate, you will be able to steal more easily.

If the eye icon is blue, no one is watching you, so be sure to do it in this state.

However, since there is a success rate for theft itself, “blue eyes” does not mean “undetectable,” so do not panic if you fail.
Also, you will not win in a fight, so if you are caught, don’t forget to immediately leave the place.

Also, stolen goods will be revealed as stolen when you sell them, so if you want to sell them, use the store of a fence or a thief’s guild, or sell them to a force other than that of the merchant.
To find out which force the merchant belongs to, select the NPC and the name of the force will be displayed in the status section on the left side.

Things to keep in mind in the early game

Here are some common mistakes and cautions in the early stages of the game.

Be alert to your surroundings while mining.

If you are near a town, it is not that frequent, but there is still a possibility that bandits on patrol will attack you.
In the early stages of the game, there is no way to win, even if there are more players on your side, let alone 1 vs. 1. Therefore, if you are attacked, run away immediately.
If you are carrying too much ore or other items and are overweight, you will be slow, so if you think they will catch up to you, consider abandoning your cargo.
You can pick up the discarded items later. If you are in danger, do not hesitate to abandon your cargo because it will be more troublesome to lose the battle.
By the way, items can be discarded by bringing up your inventory and dragging and dropping items toward the outside of the frame.
If you have multiple stacks, you can also use Shift+drag-and-drop to discard them all at once.

Buildings are not built.

When you build a building, an event called a raid event will periodically occur, in which enemies will attack you.
This applies to even a single hut, so it is best to avoid them until you are somewhat stronger.
Although it is understandable that you want to build a base as soon as possible, you should do so only after you are at least strong enough to win almost unilaterally against bandits in the wilderness.

Avoid damaging actions as much as possible.

You can earn money with zero resources even if you run out of money, but if you lose a limb early in the game, or if you are alone and unconscious in the wilderness, you are practically dead even if the game is not over.
Therefore, it is wise to avoid taking damage as much as possible. On the other hand, even if you become a slave or a prisoner of war, you can usually manage to get out of it.

Now, that’s all about how to make money in the early stages of the game.
Once you are able to earn money in a stable manner in the way you like, go next to “building a base in town”.

In this article, I will introduce my own base creation.Incidentally, since the creation of a base in this game is end c...

Kenshi — Beginner Start Guide (2) – Building a base in town

Once you have saved up some money, the next step is to buy a house in one of the cities.Although it is often not necess...
Kenshi — Beginner Start Guide (2) – Building a base in town
Home
Strategy Guide
advertisement